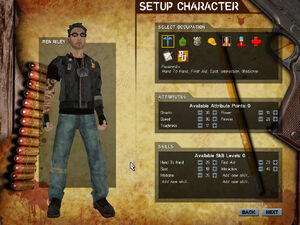 Ben Riley is a young survivor in his early to mid–twenties. He has been at the fringes of the fight for the most part, and was not sitting in at the Pentagon or the White House in the early stages of the fight.

What makes him exceptional is his will to live, his ability to lead. Even in his early 20's, he has a quality that all the steroidal nightmare fantasy characters in other games will never have: vision. The humanistic hubris to believe that he can beat Death, not by becoming Shiva, but by respecting and protecting life — and saving the lives of real people, in all their lamentable frailty and with all their oh–so–human weakness.

It is time to make a stand. You are the man with a plan. You are the one guy who has just had enough. You are going to bring people, and tools and weapons together and draw the line that says "no more".

Ben Riley's take on this phenomenon is embittered and caustic. He is a young man who has suffered greatly and lost everyone and everything he loved.

From the New World Encyclopedia:

Benjamin Lucius Riley (November 1, 1986 - ) The available primary sources disagree on the details of the early career and birthplace of Benjamin L. Riley. Journal entries written by survivor Algernon Blackwood establish that Riley, like Blackwood himself, was a former reporter — first–hand interviews with former military survivors tends to indicate that Riley had been a private in he U.S. Army, while former doctors and nurses often claim that Riley had trained as a paramedic, and career criminals are confident that he been incarcerated for petty theft. At present it seems most likely that Riley never told anyone what his real occupation had been, prior to the Troubles, and that various members of his crew had simply assumed that he had done certain jobs based on his possession of the appropriate job skills.

The only facts which are now certain are that Ben Riley arrived in the town of Piety, Indiana on the morning of October 16th, 20--, with an express intention of saving its surviving human population from a breaking Wave of dead marching from the former city of Indianapolis. In the course of 14 eventful days, Riley was able to seize control of an abandoned building, recruit a group of stalwart human resisters, build barricades and traps, and supply food and water at one of the first known "Fort Zombie" sanctuaries to stand against such a Wave.

Sources agree that Riley had no surviving family of his own. The present wherabouts of this early resistance leader are unknown.

Ben Riley is the main character in Fort Zombie.

No matter what version of Ben Riley you choose to play — and you have some creative input in the character generation at the beginning — he isn't ever going to be one of the Extreeme! Fantasy archetypes that you see in a lot of games. He's in his early to mid twenties, and while he may have been in the army for a year or two, he is not a Kryptonian or a Terminator. He's just a human being, and a relatively young and average one at that — neither Rambo nor Werner Von Braun.

Each of the default templates has 125 Attribute points and 175 Skill points.

By selecting one of the basic templates and reducing all Attributes and Skills to the limit allowed, you can adjust any starting template to achieve your own version of Ben Riley.

Community content is available under CC-BY-SA unless otherwise noted.
Advertisement