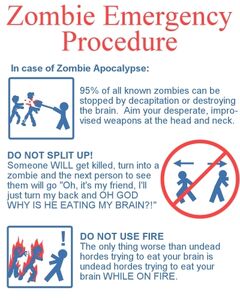 Every character in Fort Zombie has five major Attributes.

Skills come in 2 varieties in Fort Zombie, Standard and Umbrella. Standard skills function as you may suspect, in a standard fashion and are specific to the task or tool being used. Umbrella skills apply to a generalized concept and work in conjunction with the specific skills that come under their jurisdiction.

For example, Pistol is an umbrella skill that covers the use of all handgun weapons. 9MM Berretta is the specific standard skill that applies to the firing of that exact pistol. When you pull the trigger on that Berretta, the game will consult that skill, then add it to your Pistol skill to come to your total skill level for firing that specific handgun.

All Skills in Fort Zombie are based on one of the 5 attributes that make up the core stats of a character. The value of the base attribute will be taken into account when calculating the strength of a skill as a direct bonus to the total percentage.

For example: The base attribute for Metal-Working is Smarts. If your Character has a Smarts score of 20 and a Metal-Working skill of 35, then any test made against that skill will be at an effective 55%.

Fort Zombie is all about learning by doing. The more you use a skill over a given day, the more chances you will have to improve it. As a general rule of thumb, lower ranked skills will increase faster than higher ranked ones ( it is easier to catch on quick than it is to perfect one's skills ) and Standard skills increase faster than Umbrella skills.

The Chimera engine ( Chimera ) is the RPG engine created in–house by Kerberos Productions for use within various games under development.

Chimera consists of the full traditional RPG character stats and skill use / development. Skill development will be a combination of roughly 70% learning by doing, 30% by "leveling up".

Chimera contains a full RPG system of inventory and usage, though equipment will depend on the game. It would not be a hunt and gather RPG without encumbrance.

Characters will also be able to craft items.

Skill specialization follows fairly realistic lines. A ships engineer will obviously be light on combat skills and heavy on technical skills at least to start with. Depending how you use the character, what tasks they perform and how much experience situations they get through you can shape their development within reason. The learning by doing aspect to experience will somewhat limit "My pilot has level 5 neurosurgery now and has never been in a hospital!!" syndrome.

There is an experience counter that is influenced not just by combat but by attempts at various tasks in general. Characters will have an overall level but skills will also develop in parallel with that.