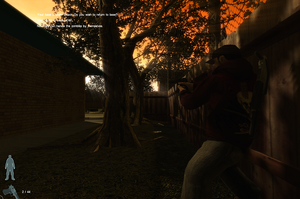 Combat and movement are real time...

The controls of Fort Zombie are fairly straight forward and typical — the standard WASD / Arrow keys move you around, while your mouse pointer rotates your camera, picks your targets, and fires your weapon, occasionally giving you options on things you can interact with, such as found item containers, survivors, and doors. When starting a new game, a basic control tutorial is provided as well. You can skip it, but be ready — there are zombies around. They stay back during the tutorial, but they're coming for you once you skip or finish it, and they don't care if you've picked up your gun yet or not.

Your character's skills and attributes are outlined and described elsewhere, but suffice to say, this is not an arcade game. While we do let you run around the 3D town of Piety and bullets aren't abstracted, you are as much or as little as your statistics make you. Standing close to a zombie helps when you're shooting them, but your skill with the weapons is still a factor, and you can miss. And the same goes for melee combat — proximity to a target is important, but does not guarantee you can land a decent punch.

Ben is on the run and about to fire an M–16 at medium range. Ben's M–16 skill is 12, his Assault Weapon Skill is 25 and his Finesse attribute is 20. When Ben pulls the trigger, the game will calculate a deviation cone based on his skill total, the weapon behavior and will take into account that Ben is moving. But for our purposes, the skill total is calculated as follows:

Melee ( blades, clubs, hand to hand ) differs from gun combat in the sense that your skill with the weapon dictates entirely whether you will hit your target zombie or not. It also dictates how easily a Zombie will hit you. For instance Ben is armed with a Sword and fighting a zombie. His skill in blades is 32%. When he swings he has a 35% chance to hit the zombie. When the zombie tries to claw or bite Ben, the zombie's chance is reduced by half Ben's relevant melee skill. In this case since Ben has a blade in his hands the zombie's chance to hit is reduced by 16%.

While zombies can't go through a wall, they can climb over most of the same obstacles you can and they won't let a window or door keep them from taking a swipe at you, so be aware — jumping up on a car may or may not help you and a door won't hold forever.

Doors and windows have their own hit points, which you can overcome through force. Doors you may never have cause to break down, but a quick jump through a window might save your hide.

When you do hit a target, or you are hit yourself, text will appear telling you where you've hit and for how much damage. Your own personal damage is tracked at the bottom left of the screen — as you'd expect, green is good, red means dead ( or as near as ).

That you and the other survivors have lasted this long is a testament to your resistance to the infection. But it's not a simple matter of biology. This darkness that has taken so many defies conventional science, and corrupts a persons very core, not merely their flesh. Those that remain strong, adamant, can avoid infection. In the event of injury, that personal attribute of Power is measured against how bad their wounds are. Morale helps fight infection and should infection take hold of someone, it can slow the infection, so should the unthinkable happen, be ready to do everything you can to keep spirits high.

Injuries can be repaired overnight with rest and rest can be aided by assigning those survivors with medical skills to the task of tending to the wounded, and those tending to the wounded are aided by medical supplies, which can be found around town at on Supply Missions. Which means more contact with the zombies, which means more chance of injury.