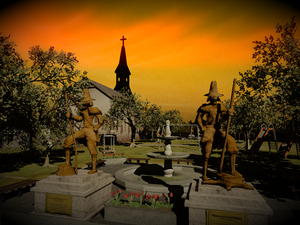 The dead rose, hideous black tangles of rotten foliage erupted from the earth and choked out all that was healthy and green, the sun refused to rise, and the moon glowered down on the city like a baleful red eye.

The main premise is that you are a survivor who has decided that Piety is as far as you are willing to run. It is time to make a stand. You are the man with a plan. You are the one guy who has just had enough. You are going to bring people, and tools and weapons together and draw the line that says "no more".

You know there is a wave of zombies from the big cities crossing the heartland and that wave is going to break over Piety sometime over the next couple of weeks. Your base has got exactly that much time to be beefed up with people, barricades and traps.

Given that, each day is crucial as you race the clock. You assign tasks like building or medical care to whatever people you have recruited — decide who you will take with you on your expedition that day, and what sort of rumours you are going to chase down. Do you look for survivors? Food? Ammo? Should you survive not only the mission and the trip there and back (there is always a chance to run into unavoidable hordes when traveling) you can then store what you have found in your stronghold and see where you stand. Tomorrow, people are going to need to be fed, barricades and traps under construction are going to need special materials and tools and you are, once again, going to have to put yourself on the line rescuing people and gathering more things that are so desperately needed to prepare for the final night.

No matter what version of Ben Riley you choose to play — and you will have some creative input in the character generation at the beginning — he is not ever going to be one of the Extreeme! Fantasy archetypes that you see in a lot of games. He is in his early to mid twenties, and while he may have been in the army for a year or two, he is not a Kryptonian or a Terminator. He is just a human being, and a relatively young and average one at that — neither Rambo nor Werner Von Braun.

What makes him exceptional is his will to live, his ability to lead. Even in his early 20's, he has a quality that all the steroidal nightmare fantasy characters in other games will never have: vision. The humanistic hubris to believe that he can beat Death, not by becoming Shiva, but by respecting and protecting life — and saving the lives of real people, in all their lamentable frailty and with all their oh–so–human weakness.

The traps and barricades that Riley puts together in the course of this game have to be simple to build and put in place with very limited manpower and supplies. They also have to be quick to build, because the clock is ticking and he has very little time. The coming wave marches relentlessly, lurching toward Piety day and night. They slow down temporarily as they engulf a town and consume and destroy it, but their overall progress is inexorable.

What's even more crucial is that the design of his barricades and traps will have to be simple enough that he can delegate the task of building and placing them to other people while he goes out on missions to scour the town for survivors, supplies and weapons. He cannot design a Rube Goldberg/Leonardo da Vinci Death Machine and then put the plans and a hammer in the hands of a 32–year–old former waitress and say "Handle this for me, won't you? I'm going to see if I can't raid the Food Library."

Riley also cannot even consider something as insanely dangerous as a moat of acid when this Fort is going to be home to children as young as eight or nine. He may take some risks and put in a few traps that could potentially hurt his own people, if they get on the wrong side of them in the thick of the fray. But he is going to minimize the chance of any friendly fire incidents in any way possible. He needs to save every person he possibly can, and that means he's never going to endanger any of his people unnecessarily.

People who have been bitten by a Zombie do not die instantly, and human beings — especially scared human beings — are some of the fastest–moving creatures on this planet.

Plagues of the Romero sort are not generally carried by people who are in the terminal stages. The zombification bomburst effect takes place during the 24–72 hour period it takes for an infected person to die — and start infecting more people.

Real plagues are not dissimilar. The problem with the We would notice it. argument is that the Centers for Disease Control are already working very hard and are running on the bleeding edge of tolerance trying to keep an eye on influenza viruses and control antibiotic–resistant new strains of tuberculosis and syphilis. A genuinely new plague with a strange vector and no known history probably could do a lot of damage — you can't prepare to prevent a disease you've never seen.

Of course, Zach isn't a biological agent in Fort Zombie, so this is all moot.

There is a malevolent Will which opposes the survivors in Fort Zombie. It has many servants and many slaves. It hungers and it hates. But it is not a human being.

People who have become the walking dead do not lose all of their former occupational skills. Someone who succumbs to the Rot while wearing a uniform and carrying a gun? Will keep wearing that uniform and firing that gun. He just won't be firing at zombies anymore.

The bravest and most noble sacrifices that were made before the current events take place were the unsung and unseen suicides of men and women who worked in the world's missile silos. They all chose to destroy themselves before their lifeless enslaved bodies could be used to push certain buttons.

The same was true of the crews of the nuclear Navy. There wasn't a single boomer that didn't go to the bottom of a trench when some genuine hero opened the cocks or set off the accelerant of the missiles on board.

In the end, the best and bravest of the military could not win. But they did their best to make sure that someone else, someday, would have a chance to win.

That someone is you.

This is the End of Days as predicted in the Revelation. And as the song says: THE ROCK CRIES OUT NO HIDING PLACE.

A great many people ran to the nearest church seeking salvation. Especially those who had not been to a Church for many years. Going to the Church was not a passive act. Against the Rot, prayer is a form of action. And the real tragedy is that if more people had gone to those churches and prayed with the strength of genuine faith, rather than simply fleeing there out of desperation and fear — this strategy might actually have done some real good.

There has never been a confrontation of this magnitude with this particular Enemy, although many visionaries and prophets anticipated that the war was inevitable.

The events of Fort Zombie represent the first coalescence of effective resistance to the Rot. This is the moment that the inheritors of a future living world will look back on and say, "It started here."

If you locked yourself in a bunker and sealed the doors with a full supply of food, water, and air, you would be fine.

For the first few days.

Then the fears and the doubts would set in. Crawling cold thoughts would strike you at odd moments. Wondering what was happening in the world above. What had become of the people, the animals, the trees, grass, the very wind and air of places you had once loved. Increasingly torturous doubts would begin to fill your mind, as you imagined the world you had known burning or tenanted by the hungry dead. Voices would echo through your mind — voices begging for your help. Voices calling out your name. In increasingly vivid nightmares you would see anyone and everyone die — every person who had shown you a moment of human decency in your life would be torn apart before your eyes, helpless and alone.

Eventually you would wake from sleep thinking that you heard a sound. A whisper, perhaps. The whimpering of a wounded dog. You would look around your shelter, heart thudding painfully in your chest, your skin crawling with an overwhelming sense of being watched.

And when you raised your hands toward your sleep crusted eyes, you would see the first rim of black rot around the cuticles of your fingernails.

If you do not fight with everything you have and everyone you love — the darkness will take you. The Dead World does not spare cowards — it oozes in through the cracks, not only of the flesh but of the spirit. -- Arinn