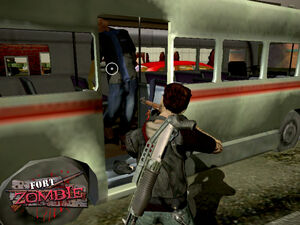 The survivors of Piety are a varied bunch. Not all of them intended to be in Piety at this time...

At the onset, the human race as we know it is teetering on the edge of extinction, although this hasn't fully sunk in for some of the shell–shocked survivors.

The key to Fort Zombie is that you are the man with a plan. You are the one guy who has just had enough. You are going to bring people, and tools and weapons together and draw the line that says "no more".

Through the course of events, Riley may encounter various other survivors. Some of them have seen things that he has not. If Riley is able to persuade them to join him at his Fort, they may open up to him and reveal some of what they personally have been through, and some of the puzzle pieces may start to fit together.

Neither Riley nor those survivors he meets are multi–armed death machines, king–of–all–abilities.

Those barricades need to get built while you are out of the base, so would not another survivor who used to be a carpenter be useful? Someone has to take care of the wounded and speed their recovery, so would not a former doctor be handy? And even out on missions, you may be good at a few things, but it sure as heck would be nice to have someone along who is especially skilled at convincing others to join you or has an excellent chance to spot the box full of Jerky hiding under that pile in the back of the wrecked store.

Morale is about keeping your people believing in you and your plan as well as the word of mouth that passes amongst the scattered survivors in town. Getting people to join you may be more difficult if you have a reputation for getting people killed or letting them starve.

Collectible NPC survivor–families give players surprising new abilities, but you have to find them all first!

Survivors are more than merely mouths to feed — as described above, they bring new skills to your final defence against the armies of the undead. They are another pair of hands to build a barricade or hold a gun. They make heading out into town less dangerous in some ways, more of a challenge in others, but seeing as they can also help you design and build traps, they might as well help you look for the parts you need to put those traps into action. Alone you are determined, but together with others, you are a force for humanity's survival. It should be no surprise to you then that if you can find and rescue whole families, there are benefits to your Fort. And if you can find those special survivors, survivors with a rare spark, just like you…