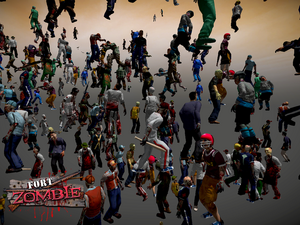 If you are picking hypothetical, fictional badness, zombies are just the worst thing that can happen — other monster movies have monster hunters. Guys who specialize in killing vampires or werewolves or whatever. But there is no such thing at zombie hunters, just survivors. Zombie numbers are mind–boggling, they have no fear, cannot be harmed in any useful way, and can only be killed in a very specific way, which is bad enough one on one, but where there’s one zombie…

Pandemic is a terrifying enough concept, and leaves its own scars on society. The big influenza outbreak of 1918 sickened enough people that you can express it in fractions, instead of merely a big number. And that just did a number on the world. Imagine something happens where the number of dead can be expressed in fractions… and then they come back to kill even more. Something like that would screw up a society for generations.

The Zombies in Fort Zombie are necromantic in origin.

There are the usual kinds of poor average souls shuffling around, but some have retained a trick or two — so there are football zombies that don’t just move towards you but will sometimes line up and try to tackle you. And there are joggers, which are about as fast as the zombies get — the rest are classic walkers from all walks of life — pun intended. Some are still holding on to tools they might have had in life and they have some idea of how to use them, like soldiers with their rifles.

The zombies are us and to a limited degree retain some of what they are, hence football players that will try to tackle you, or soldiers having some vague muscle memory about how to squeeze off a shot at you.

Zombies seek to eat living flesh with seemingly no particular preference for brains.

The bite of a Zombie is infectious, leading to eventual death and re–animation unless promptly treated at the time of infliction. However, catching the Rot is not dependent solely on physical contact with a zombie.

Dozens of Zombies, some with special abilities derived from their half–remembered lives before becoming undead!

While Head Shots will usually kill a Zombie, you should be aware that not all Zombies are restricted to moving at a shuffle — some even run.

Lack of zombie parts? How about they had them shot off earlier in the action? Rest assured that zombie parts roll about on the ground when blown off unless the damage take to the part is so high it is destroyed completely by it. Also be assured that some things may take advantage of those spare limbs laying about.

Zombies go down pretty easy — unfortunately they get back up again most times just as easy. Zombies should never beat you one on one, it is the turning around and realizing that while you have been satisfyingly beating one to real death, 6 more have surrounded you. So your violence in Fort Zombie has to be intense but also smart.

Recent research on the phenomenon show indications that not all infected completely lose their mental faculties after re–animation.
Further research as to the cause of such retention is highly recommended. — Document Unknown

BTW a mine flail would be AWESOME vs zombies — I wonder how many are in stock and how spread out they are? — Mecron